Well, we knew the supposedly alt-right caused violence was all narrative but it’s always surprising when someone not on that side of things comes out and admits it.

An “Independent Review Of The 2017 Protest Events In Charlottesville, Virginia,” by a team headed by Timothy J. Heaphy of the Richmond VA law firm Hunton & Williams commissioned by the Charlottesville city government, has just been released. The results are utterly damning. No accusation leveled on August 12 even approached the actual conduct of the Charlottesville Police Department. The only question: whether incompetence or malevolence was the greater factor.

The Heaphy Report raises major issues about the future of free speech in the United States, the influence of Leftist radicalism within government, and the politicization of law enforcement. But, as lawsuits are already pending, the specific events, decisions, and tactical police deployments highlighted in the Heaphy Report are likely to draw the most attention in the immediate future.

The smoking gun: the Heaphy report’s finding that the police never intended to separate the two sides, prevent violence, or allow the demonstration to take place. Instead, the Charlottesville Police wanted violence, which could then be used as an excuse to break up the demonstration.

Well worth reading the whole thing.

Who knew?  You expect this sort of thing from California, but Virginia?  If you’ve seen any of the coverage by MSM of the Unite the Right rally in Charlottesville, you would think that those evil Nazi, white supremacists raided the town and started causing trouble (you know, the usual narrative).  But folks who were there for the Unite the Right event are telling a very different story.

I’m sure a lot more will come out about what actually happened in the next few days (just like it did after the various Berkeley riots/rallies), but here’s Brittany Pettibone’s interview of one attendee:

Antifa, perhaps bored by their usual targets or just lacking something to do, has added a Catholic men’s conference to their list of “hate groups” deserving of being shut down. Since they have no grasp on what truth means, they have no problem spinning a theological conference designed to help men become better husbands and fathers into a woman-hating, white supremacist organization.  If the facts don’t fit your narrative, just ignore the facts!

Church Militant, the organizer of the conference, addressed the Antifa threat in a a press release:

FERNDALE, Mich. (ChurchMilitant.com) – Church Militant, a 12-year-old Catholic media apostolate, with headquarters in the Detroit suburb of Ferndale, is coming under attack by Antifa-related protestors claiming the religious organization inspires a “culture of rape” and is “white supremacist.”

The group Michigan Peoples Defense Network (MPDN) is planning a demonstration at Church Militant’s third annual Strength and Honor Conference, to be held in Sterling Heights, Michigan on Saturday, August 5. The conference is entirely theological in nature, offering talks on the essential role of sacrificial masculinity required of Catholic men to be good husbands and fathers. MPDN’s aim is to shut down the event.

In a further effort to intimidate, MPDN is holding a press conference on the sidewalk in front Church Militant studios Friday, July 28, right by the front door, announcing the August 5 protest.

The claims by MPDN are completely false and unfounded. The claim that Church Militant is a promoter of white male supremacy is immediately contradicted by the following facts:

Church Militant absolutely condemns and abhors the lies and violence that have become the hallmark of the Antifa movement, which MPDN members associate with on social media. Church Militant is not a hate group; MPDN is the real hate group, trying to intimidate religious organizations into silence and shut down a conference meant to help men become better husbands, fathers, sons and brothers by fostering the virtues of humility, charity and sacrifice.

Church Militant is further disturbed by the group’s thinly veiled threats of physical violence present in the language of their site and Facebook page. This kind of discourse cannot be allowed to stand in a civilized nation.

Church Militant is open to discussion with anyone, and have indeed made this a hallmark of the work conducted here for a dozen years, but we will not be cowed by lies and thug tactics becoming so commonplace on the Left.

Let’s hope an organization called Church Militant won’t be cowed and won’t let their conference be shut down.

Proving yet again that facts do not matter to Antifa, look who one of the organizers of the men’s conference is:

Christine Niles, a Vietnamese immigrant who helps run… [Church Militant] expected to spend this week preparing theological materials and getting ready for the group’s annual conference for men.

Instead, Niles, who is editor-in-chief of Church Militant, has been in consultations with local law enforcement after learning that a left-wing group is drumming up support to shut down the conference, which will take place on Aug. 4-6 at locations in Ferndale and Sterling Heights, Mich…

The theological conference causing controversy, titled “Strength and Honor,” is billed as “offering talks on the essential role of sacrificial masculinity of Catholic men to be good husbands and fathers” and to equip attendees with tools to “gain the spiritual and mental tools to be strong leaders among the faithful.”

Did you catch that?  A Vietnamese immigrant woman is the editor-in-chief of Church Militant and one of the main organizers of the men’s conference with the goal of focusing on sacrificial masculinity and teaching men to be good husbands and fathers.

To Antifa, this equals a hate group that “promotes a hateful, anti-woman message,” a “culture of rape,” and is “white supremacist.”  In a Facebook post about the planned demonstrations against Church Militant, they added this:

“Many of the church’s points are lifted from or are identical to ‘men’s rights’ discourse, which focuses on reducing women’s agency and reproductive rights… The community will picket and protest to shut down the hateful messages spread at this conference… The church also peddles racist, anti-Muslim rhetoric, painting Muslim migrants and refugees as sexual predators… As the radical Christian right rises in America, having supported Donald Trump’s campaign of hatred against the most marginalized, it is more vital than ever that the community stands against hate draped in a cross.”

What strikes me most about this statement is the ignorance.  Many of the church’s points are lifted from… the men’s rights movement?  That is one of the stupidest things I’ve ever heard… aside from ignoring all the facts right in front of their faces that contradict every statement they make.

Ms. Niles responded in a statement on behalf of Church Militant:

“The real bone of contention that MPDN has with Church Militant is not the spurious claims and lies it’s telling, but the positions we take on morality and decency… Church Militant is not a hate group; MPDN is the real hate group, trying to intimidate religious organizations into silence and shut down a conference meant to help men by fostering the virtues of humility, charity and sacrifice.”

If a religious group hosting a conference to promote the virtues of humility, charity, and sacrifice can become a target of Antifa, no one with conservative and/or Christian positions is safe.

Razorfist has a history lesson.

Then he has this little gem down in the comments:

“I don’t mind telling you in confidence that I am keeping in fairly close touch with that admirable Italian gentleman. [Fascism] is the cleanest … most efficiently operating piece of social machinery I’ve ever seen. It makes me envious.”
-Franklin Delano Roosevelt, on Mussolini 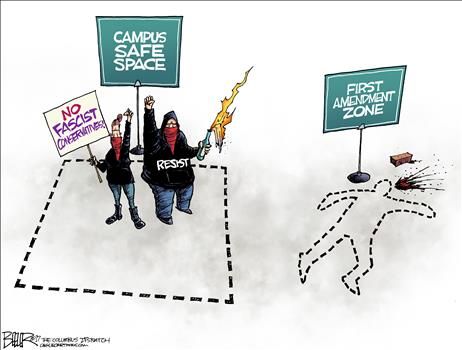 This gives “safe space” a whole new meaning: be on our side or we’re going to attack (and possibly kill) you.

What a world we live in when Weaponized Autists on the internet are doing a better job than law enforcement.  Of course since this is Berkeley and the victim was a Trump supporter this isn’t actually a very high bar to pass. Still the current environment of anarcho-tyranny where the law is selectively enforced is going to push more people towards taking the law into their own hands.  The less the police do their job the more internet vigilantes will.

Hello, we are antelopes

Antelopes are very keen surfing the web and sharing what they found.

Antelope Games
Create a free website or blog at WordPress.com.